Electroluminescent wire (el wire for short) has been used by light painting artists for several years. It’s most common use is creating a glowing smokey effect (ex. 1). A less common use is mounting it onto objects and creating defined shapes and patterns (ex 2). 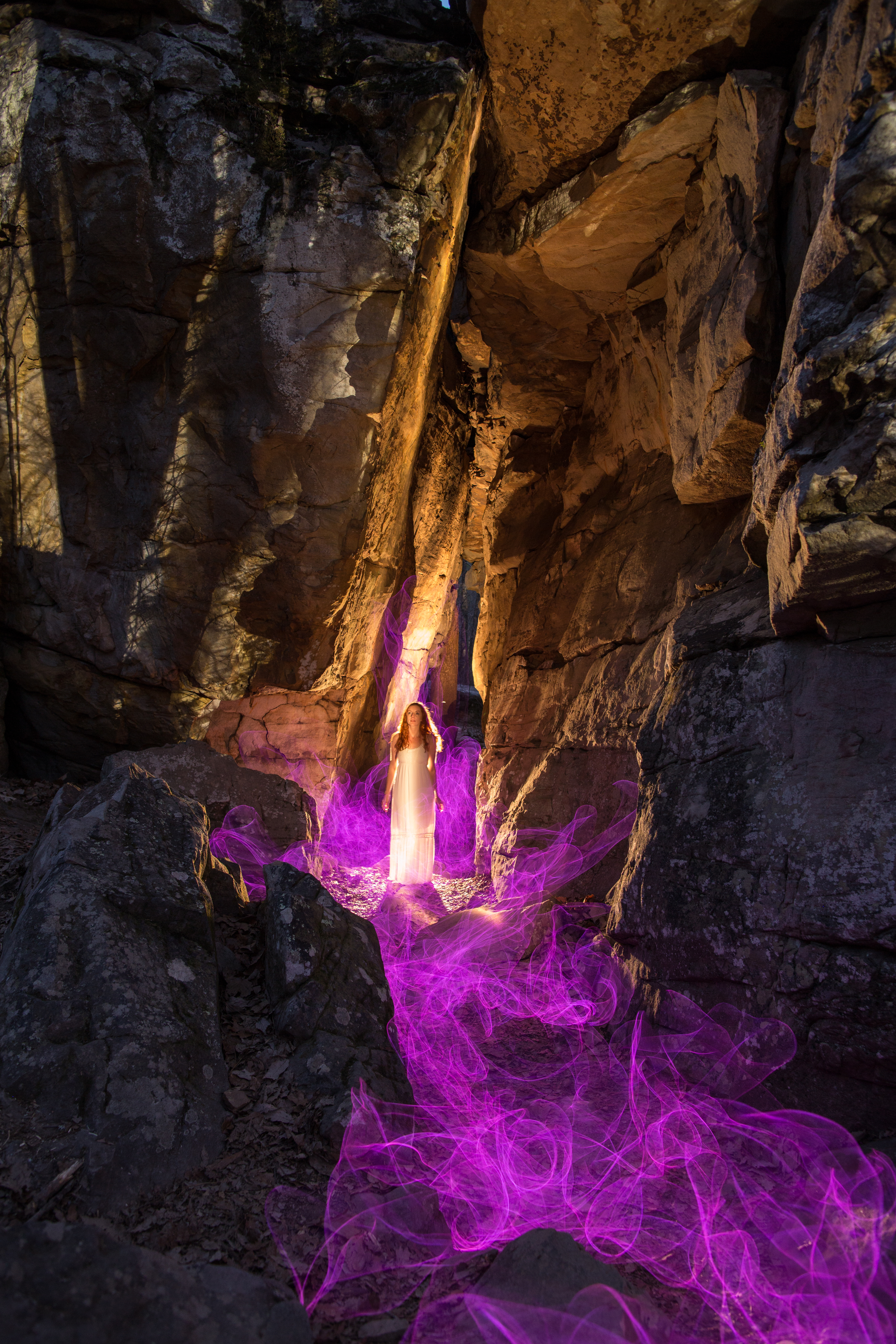 ex 1 : For this photo, blue el wire was taped onto a long stick to get the plumes of light so far above the head of the subject. It was also shot under a full moon which helped light up the environment. A flash light was also used to light behind the subject and the limbs in the center top of the composition. 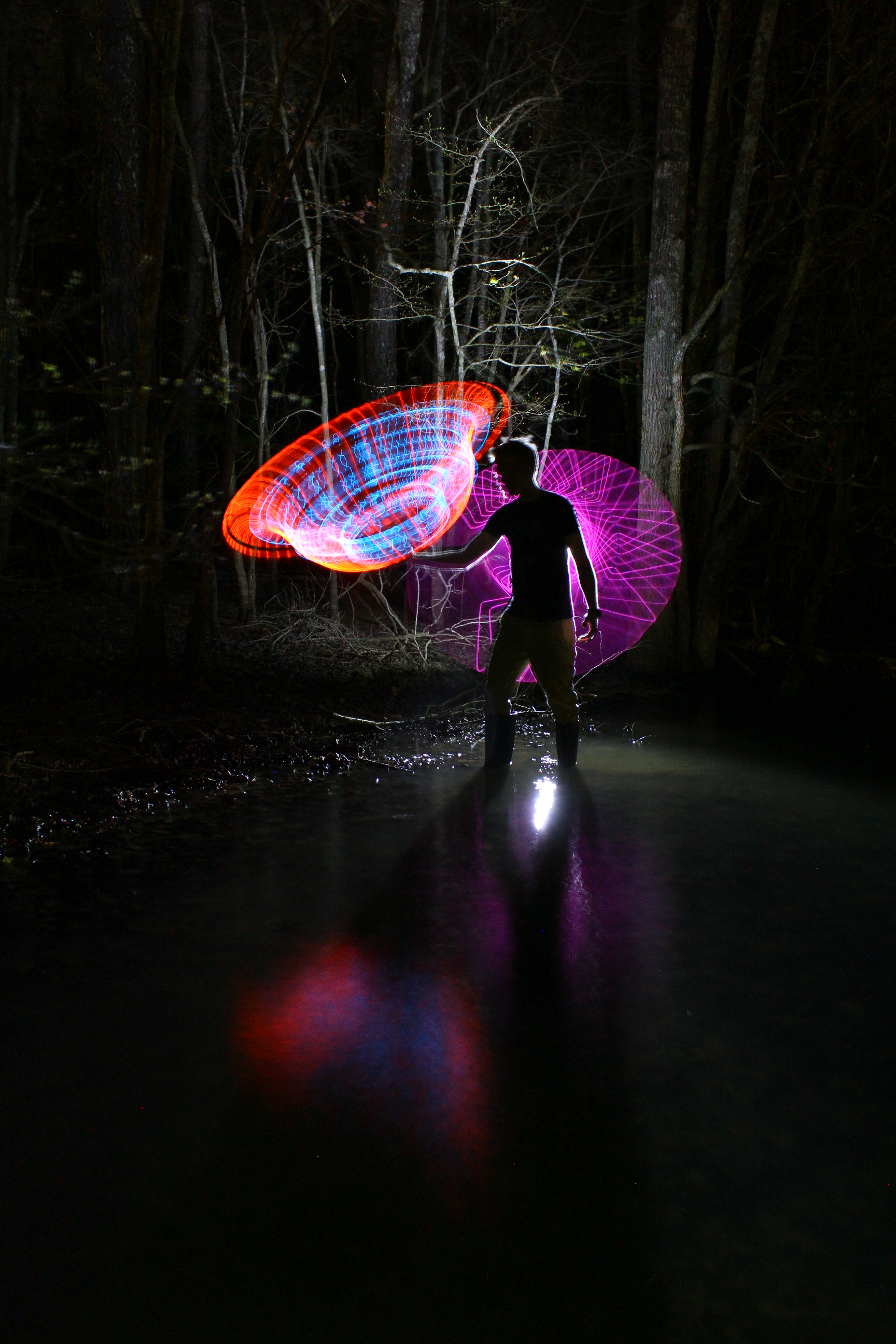 ex 2 : El wire was taped onto a diy rig I fashioned that spun on a tilted axis to create the 3-D effects. It’s the same light source as the above image, just a different application. This was shot on a moonless night and a small flash light was used to light the trees behind the subject.*

Below is the rig used to create the shapes in ex 2. It’s an old bike wheel mounted on an old tripod. 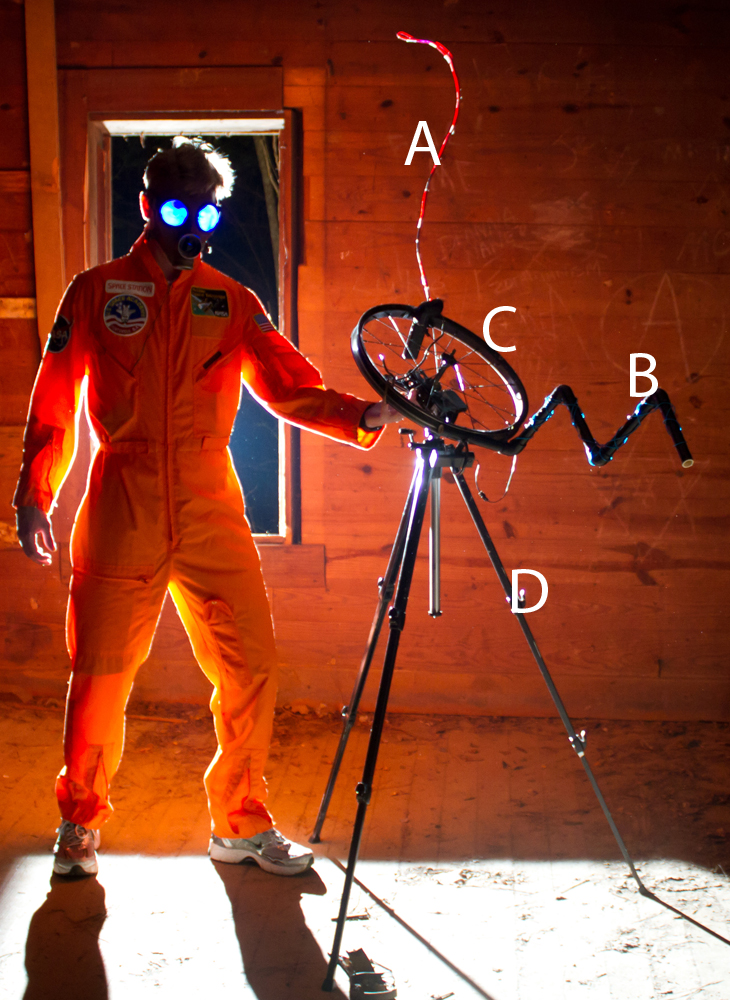 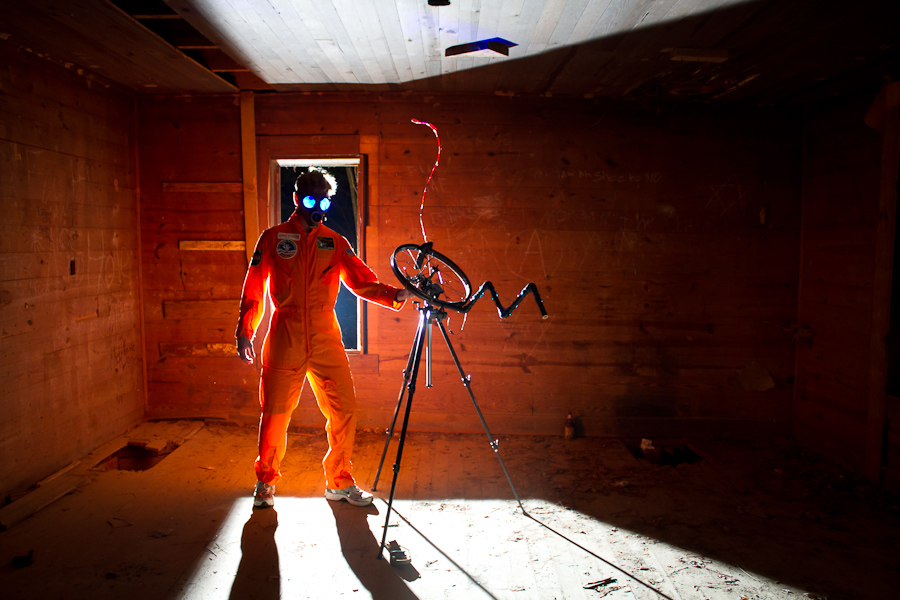 And here’s the final product. The eyes were lit with a string of battery operated LEDs stuffed into the gas mask. The only environment lighting was a canon speedlite 430ex II fired through the window directly into the subject’s back. There was enough bounced light from the interior of the building to add some fill to the front of the subject. If you look carefully, you can see the faint blue lines below the light shape which were the tripod legs reflecting the light from the el wire. Perfection is so elusive 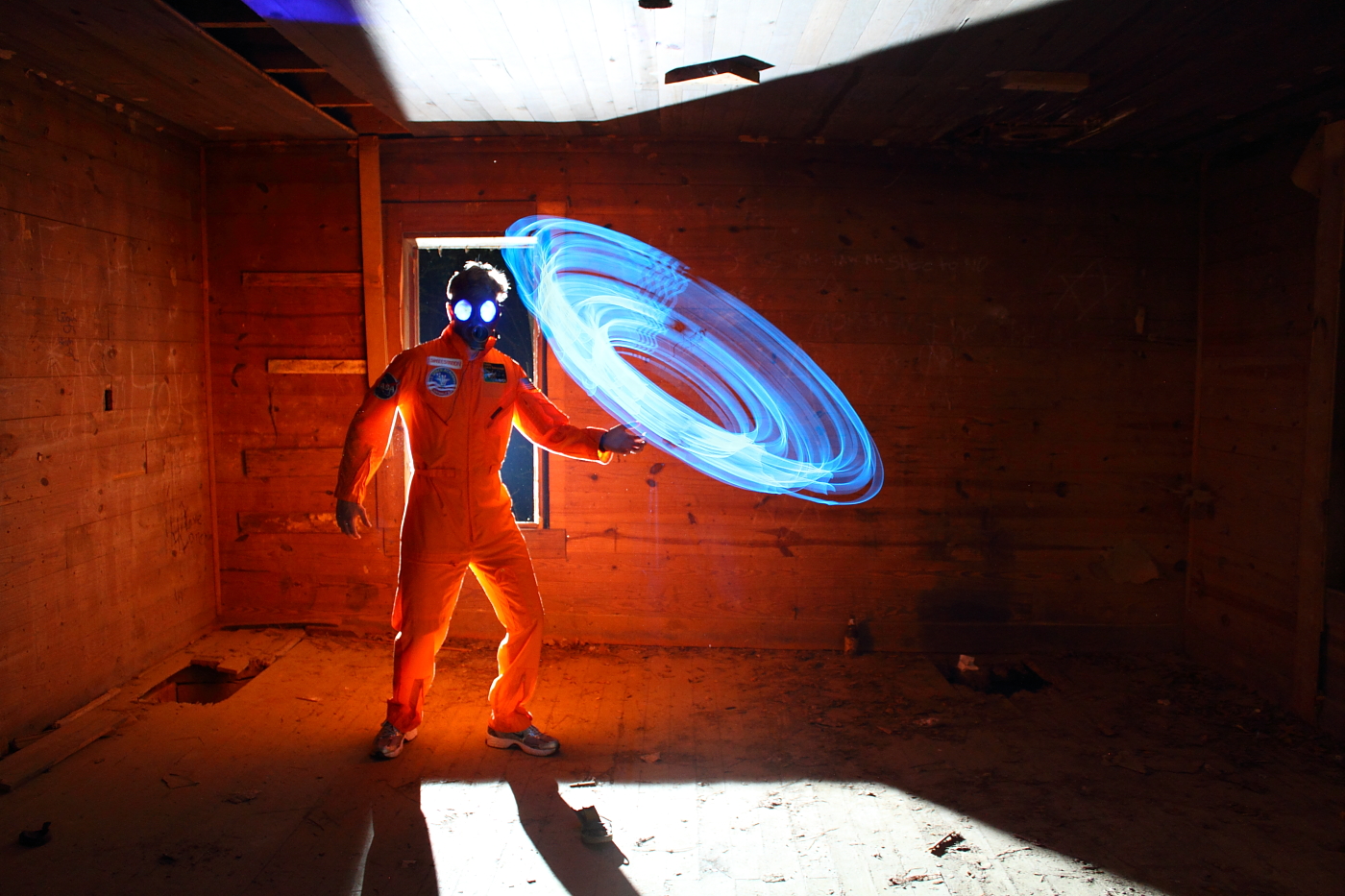 In addition to creating 3-D shapes with el wire, you can also make some pretty cool 2-D patterns. I taped el wire onto a piece of foamboard and then attached it to my circle maker. I then moved the board around in consistent increments, holding each position for a second or two to burn in the el wire pattern.

Here’s an example of the rig. It’s not the exact pattern I used for the photos below, but you get the idea. 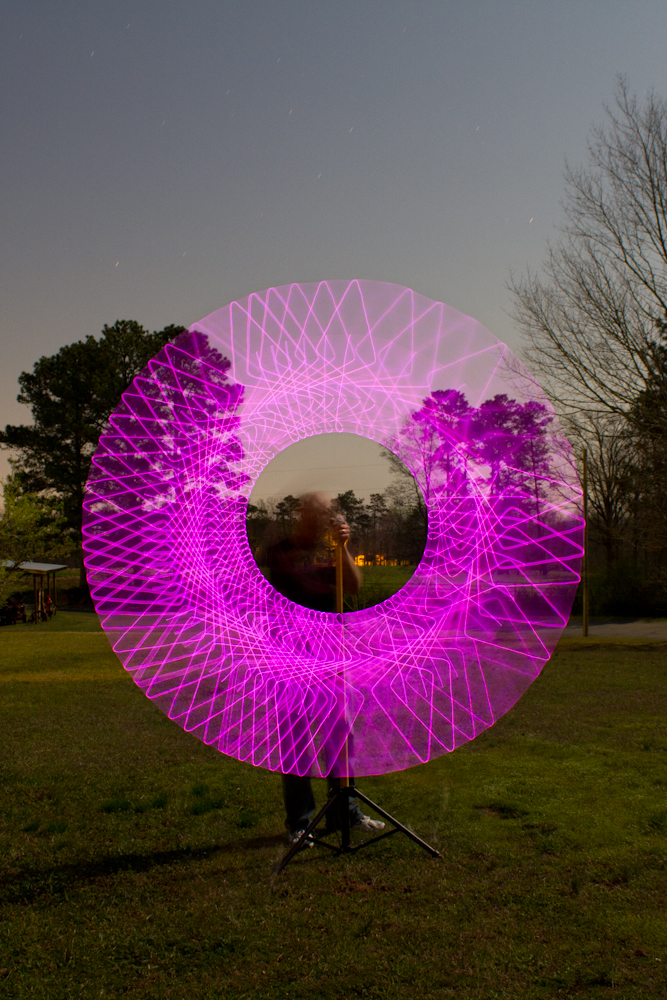 Test shot in the yard. 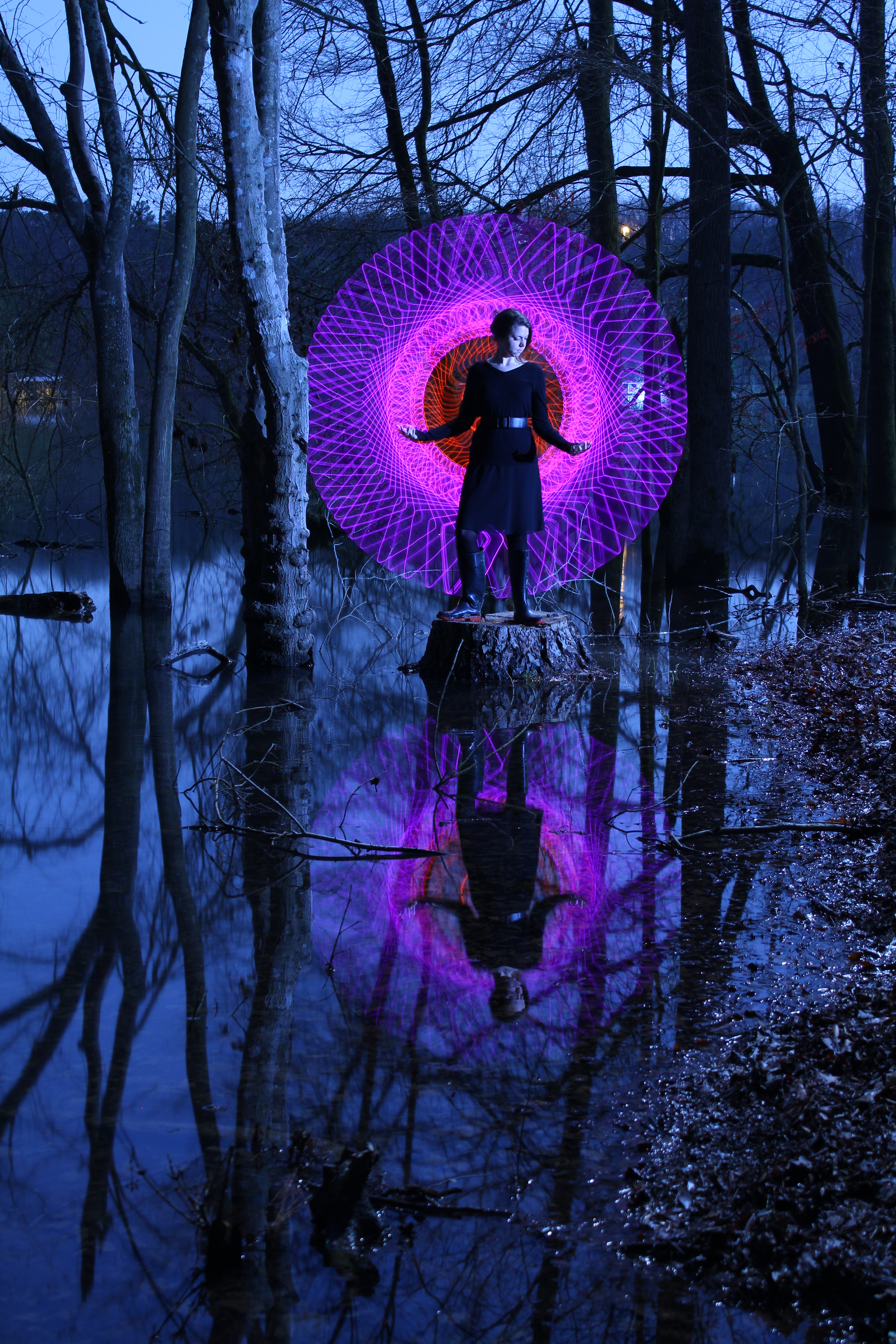